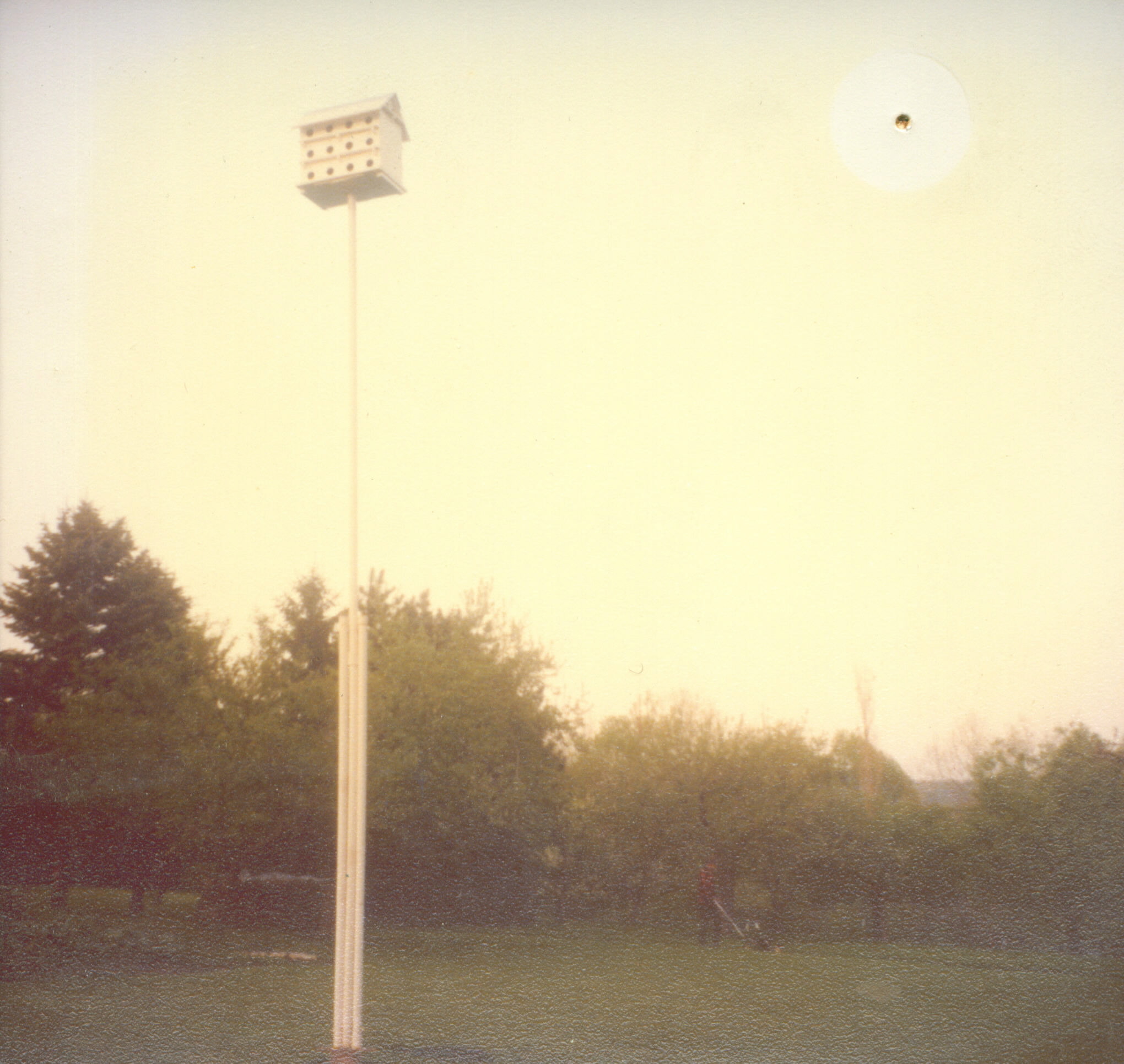 Many papers dealing with homing and orientation have been published. Relatively few of these papers pertain to homing ability of passerines [songbirds] during the breeding season.  With this in mind I conducted a series of 16 homing experiments on Purple Martins (Progne subis) in the summer of 1958 at the University of Michigan Biological Station, Cheboygan County, Michigan.  A colony of 60 pairs of martins nested in four houses along the shore of Douglas Lake.

I trapped the martins in nylon snares, made of six-pound-test Monofilament fishing line, placed at the entrances to the nests. The loop of the hole surrounded the entrance hole and was held in position by a tack.  When the adult entered the nest it passed throught the noose which closed around its neck. The weight of the bird kept the noose tight, thus preventing escape.  The bird struggled only slightly and sometimes hung motionless until I released them.  No birds were injured by the snares; all birds trapped and used in experiments survived throughout the summer.

Since the females did most of the nesting tasks they entered the compartments more readily, hence only two males were captured during the summer. Only one member of a pair was used in any one trial. A different bird was used for each trial.  Birds were transported to the point of release by automobile.  They were carried in closed cigar boxes, and the period of confinement ranged from 15 minutes to 23.8 hours.

Each experimental bird was color-marked in such a manner that I could distinguish it from all other martins in the colony.  However, these color markings were of little use at a distance. Therefore, I waited until I definitely saw the marked bird return to the nest compartment before I considered it as a return. I refrained from marking the flight feathers with enamel [paint] because it might have interfered with flight.  The enamel was placed on the crown, rump, breast, back, throat or crissum.  Seven different colors of enamel were used. For more permanent identification, a U.S. Fish and Wildlife Service numbered aluminum band was placed on one leg of each bird and a plastic color band on the other.

Adult martins were transported to distances ranging from 1.75 miles to 234 miles (air distance).  The length of time required for returns varied greatly.  In several cases, the precise time of return could not be determined.  Furthermore, some homing birds probably were in the vicinity of the colony for some time without returning to the nest and therefore passed unnoticed.  The experimental martins were usually extremely nervous after returning and hesitated to approach the nest compartment.  They closely examined the entrance before they entered.

Weather conditions during these experiments varied greatly.  Birds were released during rainstorms, cloudy periods, clear sunny days, clear starlit nights, and cloudy nights.  Wind velocity varied from two or three m.p.h. up to 28 m.p.h.
I released birds in various directions from the home colony.  Birds were liberated north of the straights of Mackinac, on the Wisconsin side of Lake Michigan, and in the interior of the lower peninsula of Michigan.

The first five martins were discharged close to the Biological Station (1.75 to 10 miles) and were apparently presented with no difficulty in homing.   This was probably familiar territory to the birds and perhaps much of it had been covered during normal feeding activities.  the longer flights probably presented a greater challenge to the birds because of the increased likelihood that they must fly over unfamiliar territory, especially from release points north and west of home.

Number 7.  Male released at 8:10 p.m., June 28 at Charlevoix, MI [32.5 miles away].  I released the bird near the shore of Lake Michigan and within the boundaries of another martin colony.  He ignored the other martins and apparently they did not respond to his presence.  The male performed the usual circling and gaining of altitude.  The circles increased in diameter as he gained altitude.  Never did the circle extend over the lake.  After a few minutes I lost sight of the bird.  I was not present at the station to record the exact time of return, but he was present at the nest 7:00 p.m., June 29.

Number 8.  This female was released at Petoskey, Michigan, [19.5 miles away] at 7:45 p.m., June 28.  She was not observed at the station that evening, but was seen at 7:00 a.m. the following day.  She probably returned the previous evening or night.  Upon release, near Little Traverse Bay, she gained altitude, circled once and headed directly toward the Station.

Number 9.  This was released at Escanaba in the Upper Peninsula of Michigan [117 miles away] at 1:00 p.m., July 1.  She remained in the area until 3:35 p.m. (observed by E. J. Tucker).  This delay in departure was probably brought about by the locality being blanketed by fog.  She had definitely returned and entered the house by noon on July 2. However, I thought I saw her at 7:15 p.m.on July 1.

Number 10 .  Female released in Lena, Wisconsin, [169 miles away] at 4:00 p.m. on July 1.  She performed the usual circling behavior upon release and gained altitude.  Perhaps this bird encountered fog when she neared Lake Michigan.  She returned to the nest at 10:30 a.m., July 2. I believe that she had just returned from the homing flightsince she seemed fatigue and unsteady.  She landed on the perch outside the nest, wobbled back and forth, and finally fell.  She caught herself on another perch located about 10 inches below.  There she perched and continued to wobble about.  At 12:30 p.m., she acted more stable but did not seem completely normal. Later in the afternoon she appeared much stronger.  It would be interesting to know the direction taken by this bird on reaching the Wisconsin shore of Lake Michigan.  Did shed follow the shoreline or did she fly directly across?

Number 11.  Female released in Ann Arbor, Michigan [234 miles away] at 10:10 p.m., July 7.  She had returned to the Station and was feeding young at 7:15 a.m., July 8.  From her behavior, I am certain that she had been in the area for some time. As mentioned earlier, the birds always seemed suspicious after returning from a homing flight.  When I first saw this bird she did not hesitate in the least before entering the nest compartment.
She made the flight of 234 miles in no more that 8.6 hours.  This is an average speed of 27.2 m.p.h.  To have established this average, the martin must have exceeded this speed considerably at times, especially if she wandered in search of landmarks.  However, the rate of return seems to exclude much wandering.  Meinertzhagen (1921:230) had comparable results with Barn Swallows (Hirundo rustica).  He conducted experiments in East Africa, and one bird averaged 37.75 m.p.h., and another 34 m.p.h. His record of an earlier flight of a swallow from Paris to Roubaix at a speed of 106 m.p.h. is open to doubt, as he pointed out. Ruppell (in Matthews, 1955:41) also conducted experiments with Barn Swallows.  His birds averaged only 9-10 miles per hour in homing. There are records of non-passerine species homing at rates of 8 to 37 m.p.h.

Most interesting is the fact that Number 11 made a nocturnal homing flight. Supposedly, Purple Martins are diurnal migrants and therefore, as discussed by Lakhov (in Mattingly, (1946:513), should not be capable of nocturnal orientation. The fact that martins may occasionally migrate night is suggested by Trautman’s statement (1940:307) referring to a flock of 150 birds that arrived in his area in the early afternoon and left at dark. He referred to this as “a rather curious performance for these supposedly day migrants.”

Many observers, including the Andersons (1946:140-141), Carter (1944:15-18), Higman (1944:43-44), and Woodbury (1946:42), have reported large flocks of martins preparing to roost for the night.  Estimates of up to 25,000 martins have been given for such roosts.  None of these observers mentions checking on these flocks at night to see if these birds were still present. Smith (1908:41-43) watched a diurnal migratory flight of more than 10,000 Purple Martins at Macatawa, Michigan.
Since the sky was entirely overcast, (a second cloud layer being above the first), it seems unlikely that celestial navigation was possible.

Number 12.  Female released in Flint, MI [185 miles away] at 6:45 p.m., July 7.  Upon release she flew south one block and then headed northwest. She had returned to the station by 7:15 a.m., July 8.  This bird probably returned earlier because she had lost all suspicion of the nest site.  Part of the flight must have been performed at night.

Number 13.  Female released in Ann Arbor, Michigan, [234 miles away] at 6:50 a.m., July 8.  This bird had been captive in a darkened container for 23.8 hours  She returned to the Biological Station sometime during the afternoon of July 8  I was prevented from checking on the return until 5:30 p.m., and she was present at that time. Apparently she made this return flight in a time comparable to bird Number 11.

Number 14.  Female released at Sleeper Lake, Luce County, in the Upper Peninsula of Michigan, [77 miles away] at 9:00 p.m., July 11.  She circled clockwise and then counterclockwise while gaining altitude and then headed southeast. I did not see her at the Station until the afternoon of July 13, although I made periodical checks during each day of her absence.

Number 15.  Female released at Michelson, Roscommon County, Michigan, [83 miles away] at 10:30 p.m.on July 18.  At the release point the sky was clear of clouds , and there was little wind.  A storm center lay between the bird and home at the time of release.  She did not return until 6:30 a.m. on July 21.

To my knowledge this was the first time Purple Martins were used in homing experiments. Other members of the Hirundinidae [swallows] have been used. These include the Bank Swallow (Riparia riparia) , Rough-winged Swallow (Stelgidopteryx ruficollis), Barn Swallow, and House Martin ( Delichon urbica).  These species have homed in trails ranging from four miles to the amazing distance of 1150 miles.  The percentage of returns has varied greatly.  Rarely did investigators that used more than four birds find a return rate higher than 50 percent. It is therefore of interest to note that all 16, or 100 percent of my Purple Martins returned from the point of release.

During the summer of 1958, 16 Purple Martins were used in a series of homingh experimentsat the University of Michigan Biological Station. The birds were released at distances ranging from 1.75 miles to 234 miles.  The rate of return varied greatly.  The most rapid return was a nocturnal flight of 234 miles in 8.58 hours.  One hundred percent of the martins returned from the homing flights. This material has been compared with the available homing data pertainingto the Hirundinidae.

I wish to express my appreciation to Harrison B. Tordoff for his useful suggestions during this project, to Donald Moline and other Station personnel for aid in dispatching and observing experimental birds, and to Edmund J. Tucker of the Michigan Conservation Department for observations on one bird at the release point. The expenses of this project were met by a National Science Foundation Grant.